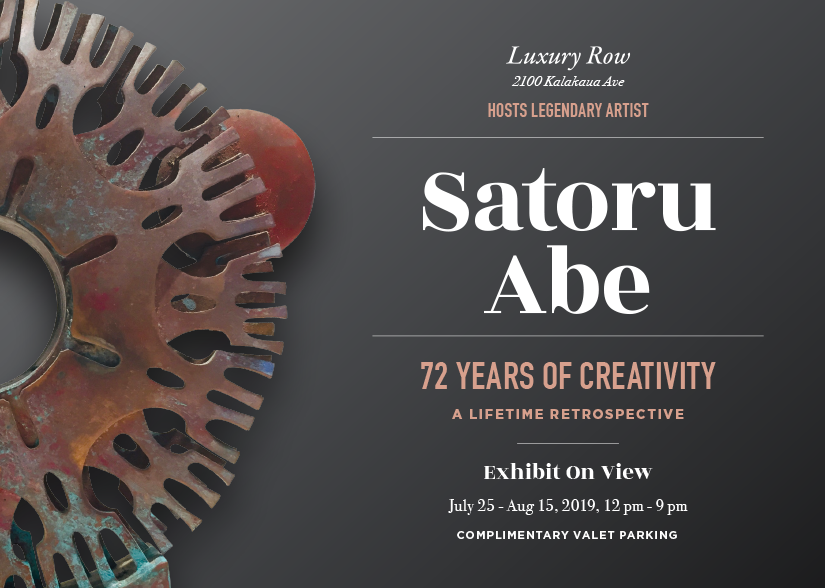 Waikiki, HI – The owners of Luxury Row are proud to host a lifetime retrospective exhibit for world-renowned artistic legend Satoru Abe, from July 24 to August 15, celebrating 72 Years of His Creativity, spanning from age 21 to 93.  Known as “The Godfather of Honolulu’s Art Scene,” Mr. Abe will work at Luxury Row daily, giving guests the rare opportunity to witness Mr. Abe creating new works of art and to meet Mr. Abe in person, while they tour the exhibit.

In 1950, at age 24, Satoru Abe held his first solo show at the historic Gima’s Art Gallery at 2141 Kalakaua Avenue, directly across from Luxury Row. Now, at age 93, his life has come full circle with his life’s retrospective exhibit back in Waikiki.  Mr. Abe has also been exhibited at world-renowned museums including MoMa, the Whitney Museum, Tokyo Central Museum, Contemporary Museum, Honolulu and Virginia Museum, Richmond, Virginia.

“It seemed destined that Mr. Abe should return to the location of his first show 69 years ago, just across the street from Luxury Row.  we are honored to host this living legend’s life retrospective.  I was enthralled to meet Mr. Abe at our 2009 event and even more excited to experience his creating new works of art at Luxury Row”, says Luxury Row’s co-owner, Robert Siegel. Luxury Row celebrated Satoru Abe in 2009, together with artists, Robert Kobayashi and Harry Tsuchidana at Luxury Row’s CHANEL Boutique’s Modern Masters Show. Other local artists were also featured in the other Fashion boutiques, including Gucci and Saint Laurent. The owners of Luxury Row seek to further stimulate cultural awareness of Hawaii’s art by combining fashion and art with “Fashion meets Art”.

Born in Honolulu, Mr. Abe studied under Shirley Russell at McKinley High School; studied at California Academy of Fine Arts; then the Art Students League in New York City, and studied under George Grosz, and Louis Bouche. There he met his wife, Ruth Tanji of Wahiawa.

In 1950, he returned to Honolulu where he had his first exhibition, and his daughter, Gail, was born. That same year, he met his mentor, the older accomplished artist, Isami Doi, and fellow artists Bumpei Akaji, Tetsuo Ochikubo, Jerry Okimoto and Tadashi Sato, who would become lifelong friends.

In 1951, Mr. Abe learned welding from Akaji, created his first sculpture, and participated in a three-person exhibition at The Honolulu Academy of Art.

Mr. Abe spent the following year in Japan, studying his roots, painting and exhibiting at Kofukai and Takemiya Galleries in Tokyo. He returned to Honolulu, and developed his first body of work, White Paintings.

In 1954, Akaji, with Abe, rented a house slated for demolition on Metcalf Street in Honolulu, to stage their joint art exhibit among seven friends--all Asian Americans.

In 1956, Mr. Abe returned to New York and began a long-term association with Sculpture Center, with four solo exhibitions there over the decade.

1959 was a monumental year. Mr. Abe was selected for the New Talent exhibition by Art in America. His sculpture was on the cover of Art in America Magazine; his work was accepted in the Museum of Modern Art (MoMA) and was featured in TIME Magazine.

In 1961, the Whitney Museum in New York purchased Mr. Abe’s sculpture, Twin Trees, for their permanent collection. His pieces are in private and public collections worldwide, and his commissioned works can be seen throughout the Hawaiian Islands and in Hiroshima, Japan.

In 1970, a grant from the National Endowment for the Arts allowed Mr. Abe to become the Artist-in-Residence in Waianae, Hawaii, and worked on his first State Foundation On Culture and Arts (SFCA) commission for Nanakuli High School. He lived in Waianae for the next fourteen years and was filmed for Artists in Hawaii - Satoru Abe, in partnership with Hawai’i Public Television in 1984.

In 1986 Mr. Abe Exhibited his first series of 200 miniature copper cutouts at Bishop Square in Honolulu and began his Masterpiece Series.

His lifetime of artistic genius was honored in 2013 at the annual Art at the Capitol in conjunction with the Hawaii State Art Museum.

“Wheel No 2” from the Wheel series will be on display from the collection of Clayton and Lynette Honbo as well as his sculpture, “Webbed Tree” that was featured at MoMA and TIME Magazine in 1959.  The 1984 video, Artists of Hawai’i - Satoru Abe will be available at the exhibit for viewing as well.